Recently I had to set up a server in which developers had access to multiple git repositories in their home directories. Here is how I went about it.

First and foremost, to access GitHub you must be authorized for private repositories. This could mean SSH keys, or authenticating with a username and password. I wanted to avoid the developers being prompted continuously, so I used keys. Also, since I can not take everyone's private key and just drop it in their home directories, I had to think of a different way to go about this. I could not use the developer's personal private key for a couple main reasons.

After a little research the best option emerged - using deploy keys! Deploy keys are SSH key pairs that apply to a single repository. Actually setting this up took a bit of time (it didn’t help getting conflicting sources of information online), but it is pretty simple. This gist here was by far the most helpful source.

There are three main steps.

Create the Deploy Key and Put it on GitHub

Everyone and their mother’s have likely created SSH keys before using this guide. Go ahead and generate an SSH key pair that can be used for the repository. 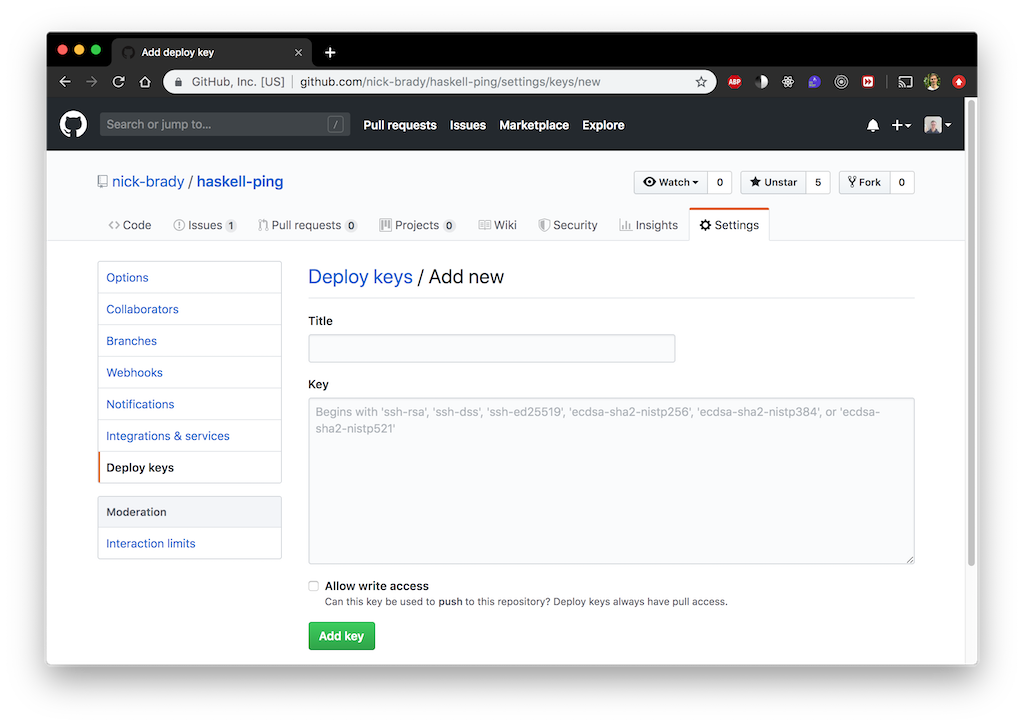 Note, only grant write access if needed (pushing code back up to origin). Also, put the private key (does not have the .pub extension) into the SSH directory of the user. I.e. ~/.ssh/.

The SSH config needs to be configured so that each repo is listed as separate host. Using subdomains of github.com can accomplish this. This is done so that when the SSH connections are started by git, that the config can use the correct file. I keep all of my private keys of the deploy keys in the ~.ssh directory with a naming convention to keep it organized - I.e. ${reponame}-dk. Where “-dk” signifies “deploy key”.

This file is configured for haskell-ping and another repository repo2.

My tree structure inside my user directory now looks like this:

In order for the config file to actually do anything, we need to update our git config for each repository so that the connection, when created, will use the subdomain we configured in our SSH config file.

The file being updated is ${REPO_DIR}/.git/config.

Here is an example file for mine after being updated to work with the SSH config above.

You can edit this file manually, or by using the git command. I prefer to use the git cli to modify the file. You can do this with

… which in my example for haskell-ping becomes

You should now be able to use the command line from each repository you have configured!