I have been writing application programming interfaces (APIs) for over 20 years, and I have always found integrations enjoyable because they are like logic puzzles which I like to do on a regular basis. Integrating systems is kind of like building with lego blocks and you are free to choose from a variety of technologies, payload types, and tools. I am a big fan of Django and its REST framework which makes it very easy to quickly build and deploy complex REST interfaces, but when it comes to writing complex transformations it is hard to beat MuleSoft's DataWeave (DW) tool.

DataWeave is an elegant and lightweight expression language. The objective of this blog is to highlight the power of DataWeave using an example JSON payload that we will transform into an XML document. This post is not intended to be aDataWeave primer, but I am going to cover some basics to ensure readers have the minimum background required to get value out of this post. If you want a more in-depth introduction to DataWeave I recommend Nial Darbey's outstanding 4 part series located at Getting started with DataWeave: Part 1. You should also review MuleSoft's DataWeave reference documentation which provides a number of excellent code snippets with examples of useful functions such as pluck, zip, flatten, reduce, etc.

One fundamental concept every Mule developer needs to be aware of is the fact that DataWeave only works with 3 data types; Simple Types, Arrays, and Ojects. This is true for all DW transformations regardless of the inbound message and the outbound message(s). Each of these is explained in a little more detail below.

We have a dealer, named Luxury Cars, who despite not being creative when it comes to names is integration savvy because they use MuleSoft tools for integration. Luxury Cars accesses a publicly available REST API that returns an array of vehicles that includes a number of attributes including manufacturer, style, model, msrp, images, description, and drive type with the latter two being optional (i.e. not all vehicles have the latter two available). The Luxury Cars IT team subscribes to the REST endpoint, but they need to transform it to an XML payload and add some additional tags for use by one of their internal systems. Further, the XML payload needs to be restricted so that only cars with an MSRP exceeding $100,000 is passed on...we are talking Luxury Cars after all! Below is the example we will walk through in detail. 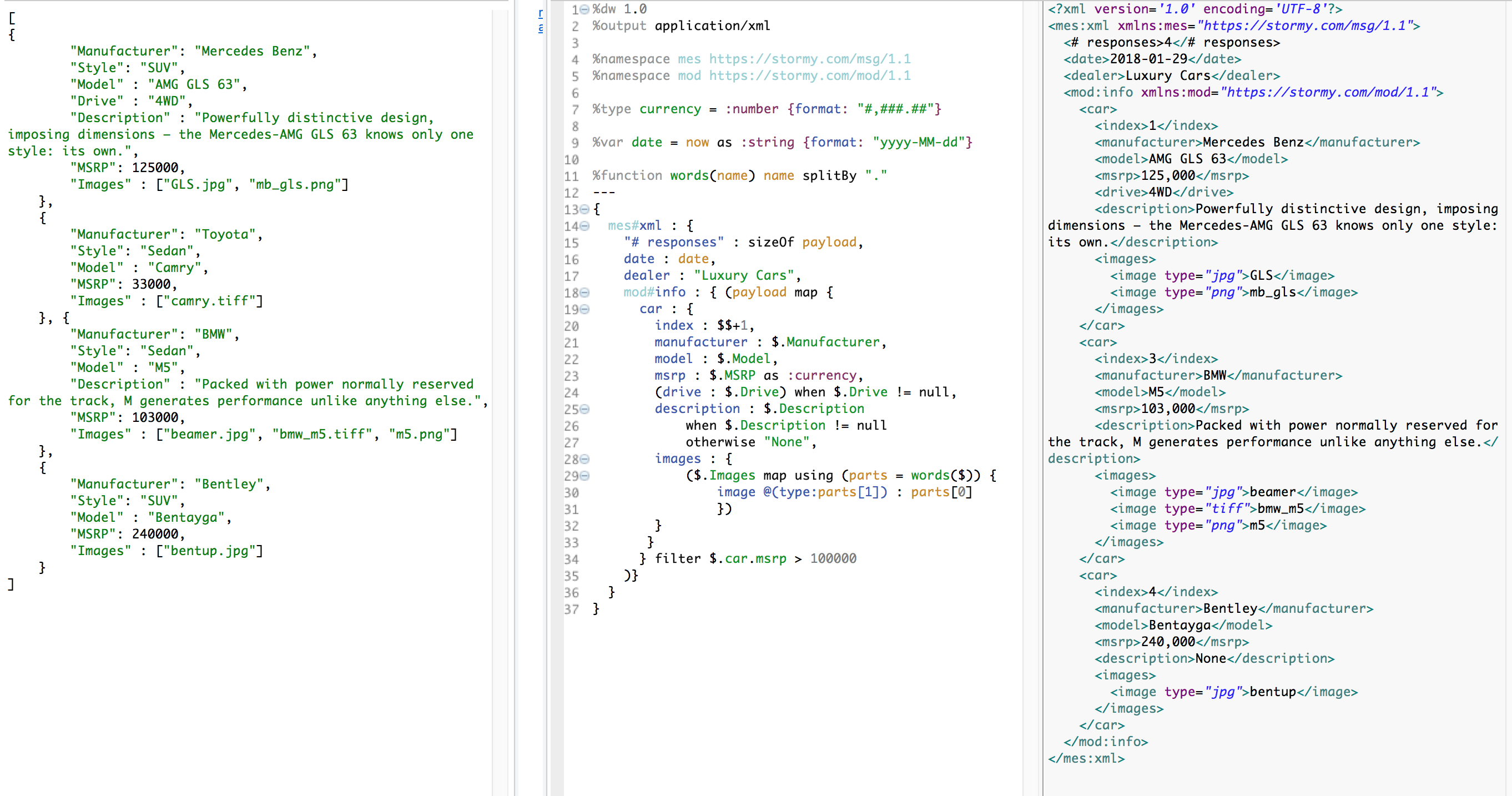 The example use case is a simple one yet it covers a wide array of powerful features and capabilities offered by DataWeave. You are well on your way to becoming proficient with DataWeave if you understand the concepts discussed in this post and the DataWeave expression discussed above. It is not unusual in enterprise-level application integration to have inbound messages that contain hundreds of lines of complex payloads of different types such as JSON, POJOs, XML, etc. and it is in these cases that DataWeave differentiates itself from other tools.